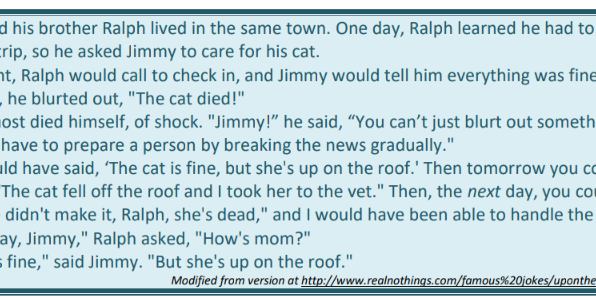 Why didn’t God simply command Avraham to “Go to the land that I will show you”? Why preface with so many details – “from your land,” “from your birthplace,” and “from your father’s house”?

The Kli Yakar suggests the command was phrased this way “because it might have been difficult for Avraham to accept everything at once.” Instead of shocking Avraham with a major upheaval, God broke it down into smaller pieces: He first introduced the idea of leaving Avraham’s land; then the people he grew up with, who had until then formed Avraham’s support system; and finally, He named the hardest piece of all, leaving his immediate family.

Complex ideas can also be difficult when introduced all at once, and so, following the example of Talmudic Sages known for opening their sermons with something light, a TorahTutors tutor prefaced Kli Yakar’s comment with a joke to illustrate the value of delivering difficult information gradually.

They were then able to dig even deeper, contrasting Kli Yakar’s interpretation to that of Radak: while Kli Yakar illustrates how God worded His command to make it easier on Avraham, Radak points out elements of the wording that made it extra difficult, such as the lack of positive information about Avraham’s destination. Ultimately, the student noted, both approaches highlight the faith Avraham demonstrated in following the command.