A Tuesday TorahTutors Tidbit About When to Remember the Exodus 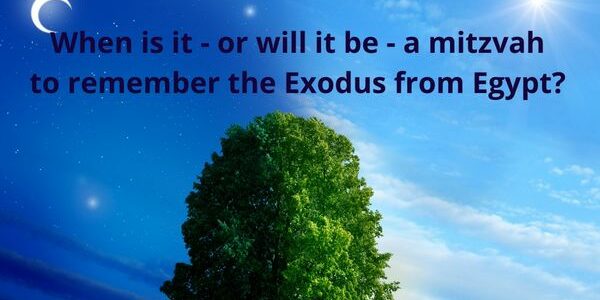 A TorahTutors student learned a timely passage at the end of the first chapter of Mishna Brachot. After discussing the timing and manner of reciting Shema morning and night, as well as the various blessings the surround its recitation, the Mishna (1:5) states that the Exodus from Egypt should be mentioned at night (and not only during the day). This line apparently stands in opposition to those who felt the third paragraph of Shema, which contains a mention of the Exodus, should not be recited at night because its primary topic is tzitzit – a daytime mitzva.

The Mishna then provides textual support for this nighttime mention of the Exodus – in the name of ben Zoma, via Rabbi Elazar ben Azarya – that the student immediately recognized as being included in the Haggadah:

R’ Elazar ben Azarya said: Behold, I am like 70 years old, and I didn’t merit [to find a textual basis] that the Exodus would be recited at night, until ben Zoma interpreted it, as it is said (Devarim 16), “in order that you will remember the day of your leaving the land of Egypt all the days of your life.”

However, there was another view as well: according to other Sages, the “all” in that verse does not include nighttime, but future daytimes; in their view, the verse is stating that we should remember the Exodus from Egypt every day during this reality and also after Mashiach comes.

That is the end of the Mishna’s discussion of the matter, and of the passage in the Haggadah, but the Gemara (12b-13a) digs deeper and illustrates the core dispute between ben Zoma and the other Sages: Will we, or won’t we, still be impressed by the Exodus from Egypt once Mashiach comes, or will those miracles be completely overshadowed by the messianic redemption?

When we experience one excitement after another, do we care only about the most recent, or are we still appreciative of earlier events?