A Tuesday TorahTutors Tidbit About Ten Tests of Tradition 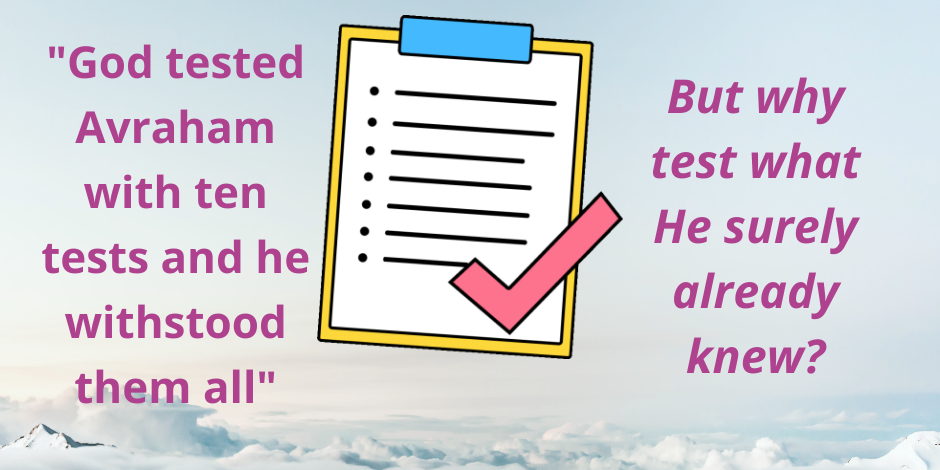 As many students are heading back to school, thoughts of testing may be in the air.

One TorahTutors student reviewing the stories of Avraham got to discuss a very different kind of test with his tutor.

Tradition has it that God tested Avraham 10 times, and he passed all ten. But if God knows everything – including the future, as He is beyond time – what was the point of these tests? Didn’t He know in advance that Avraham would pass?

They discussed several answers; for instance, that the point of the tests was to allow Avraham to actualize his potential and see for himself what he’s capable of. Actually going through these experiences also enabled Avraham to be rewarded for the good choices he made and deeds he did. (See Ramban on Bereishit 22:1.)

Another explanation that resonated with the student and tutor is given by Rav Dessler. He explains that Avraham built up a variety of positive qualities and values through passing these tests, which could then be passed down to his descendants (a type of “spiritual DNA”) and enable them to withstand tests of their own.

For instance, Jews throughout history have remained steadfast in their beliefs even when challenged to the point of death. They got that strength from Avraham, who tradition tells us was willing to die rather than bow to Nimrod’s idols. Jews have given up everything familiar to make a new life in the Holy Land, just like Avraham did.
Anytime we face a challenge, we can turn to our ancestor, to the trials he endured and his steadfast faith even when he didn’t understand why something was happening, and find our own strength through him.

We may not generally have tests at TorahTutors (unless, perhaps, a student wants them) – but we do appreciate the value of a challenge and the deep relevance of the ancient Torah text.