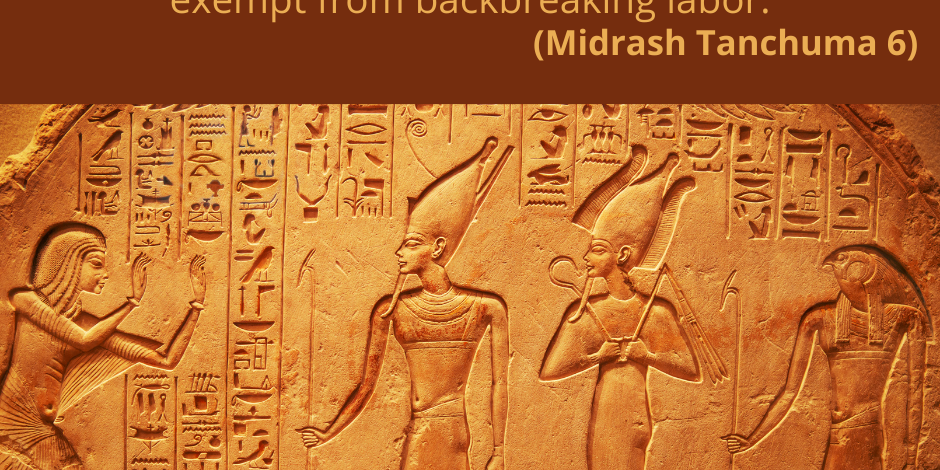 In last week’s parsha (Vayechi), Yaakov cursed Levi’s anger and indicated that the tribe would be dispersed (Bereishit 49:7) – seemingly as punishment for Levi’s vengeance. At the same time, some see a positive side both in Levi’s passion and in the tribe’s dispersal: in the future, the tribe of Levi would produce passionate teachers whose Torah ideas would resonate throughout all the cities of Israel.

The tribe’s passion for doing what’s right can also be seen in this week’s parsha (Shemot). According to some midrashic traditions, Israelite servitude in Egypt began when Pharaoh himself invited all his subjects to work alongside him; only later did he pull the Egyptian workers out and force the children of Israel to continue laboring alone. The tribe of Levi, according to some accounts, did not participate; some explain that they felt joining the project would have subjected them to idolatrous Egyptian influences, detracting from their destiny as teachers of Israelite traditions. This passion and dedication to their ideals can be seen as having protected the Levites from being drawn into slavery, freeing them to provide strength and encouragement to the other tribes in maintaining their identity throughout the centuries in Egypt.

Learning about Levi provides much food for thought and discussion about balancing difference aspects of personal and national identity, standing up for one’s beliefs, and so much more.

We’re so proud of our students, who are learning the texts of their heritage and thoughtfully building their own identities as part of the Jewish people.