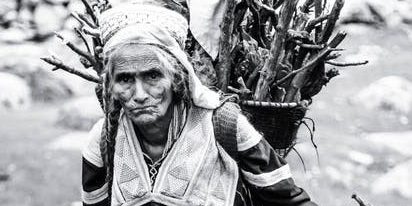 The Gemara in Nedarim (45a) indicates that one can declare an item “hefker” (ownerless) only if there are three people present. (One to potentially take ownership of the item, and two to witness.)

This rule raises questions about an aecdote in Bava Metzia 30b: R’ Yishmael, the son of Rabbi Yosi, encountered a man who had been carrying a load of wood and stopped to rest. After his break, he needed help to get the wood back up into carrying position – a mitzvah R’ Yishmael felt he was unable to do (for reasons beyond the scope of this tidbit). Not wanting to simply refuse, he came up with a clever solution: he paid for the wood so the man wouldn’t lose out from not being able to pick it back up; then, since he didn’t actually want the wood himself, he declared it hefker so that anyone coming by would be welcome to take some without being guilty of theft.

There is a lot to think about in this story, including: Given the rule in Nedarim, how could he have declared the wood hefker without two others present? And if there were two others present – why didn’t they help the man with his load?

Several Talmudic commentators weigh in on this question, offering a number of speculative scenarios: perhaps there were indeed others present, but they were all physically incapacitated, or had their own loads (which they couldn’t put down without needing help themselves), or were riding mules that would bolt (mulishly) if not held tightly – or, perhaps the others were locked in a palace. In any of these cases, they would have been unable to help with loading but could see and serve at witnesses to a declaration of “hefkerut.”

Far-fetched speculation? Maybe – but a TorahTutors student argued these scenarios may not be so outlandish after all, comparing the last one in particular to a situation of being stuck inside while looking out that has become all too real over the past year: namely, quarantine.

The student and tutor also discussed possible advantages of raising even unlikely speculative answers to a question, such as that sometimes, it may not be as important to know THE answer as to build the sense that there ARE possible answers out there.